The first award was presented to Lisa Lupin, who was critical in helping secure funds to install state-of-the-art X-grass turf last spring in the Nursery School play yard, Marks Park. Lisa also served as co-chair of the JCC’s sold out Center Celebration. 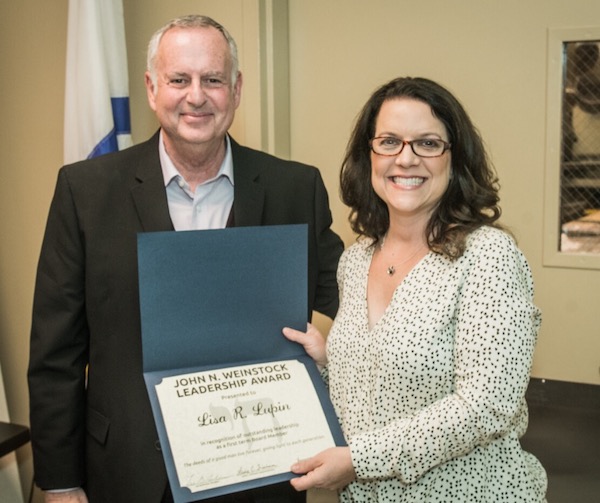 Lee said, “Lisa’s wheels are always turning, and she is always looking for ways to make great things even better. She volunteers without being asked. She is always dependable. And most importantly, Lisa is committed to making the JCC better for future generations.”

The second award was presented to Gabe Feldman who in the past year assumed several leadership roles at the JCC focused on early childhood program excellence. He serves on the Children’s Committee, SHEVA Leadership Team, and Security Task Force. He is also chair of the JCC’s Reimagining Committee, a group that was formed to evaluate the JCC’s physical space and create plans to address the trends and future needs of our growing youth programs. 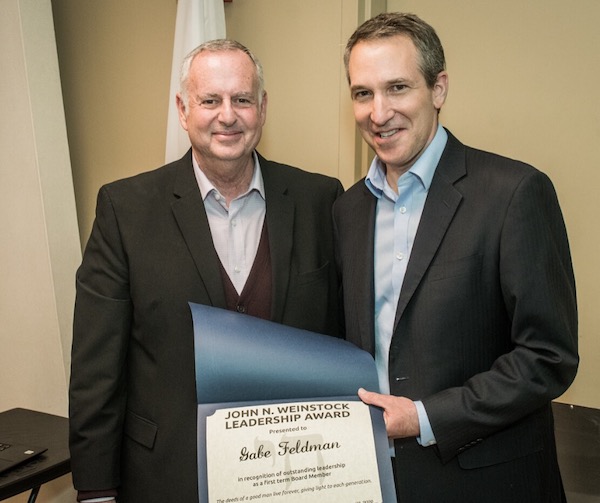 Lee said, “You wouldn’t know that Gabe has nearly 43,000 followers on Twitter, or that he is regularly asked to be an expert source for The New York Times, Wall Street Journal, and USA Today. That is because Gabe is extremely conscientious and his priorities lie in recognizing and elevating others.”

The Maurice Feingerts Award for Leadership was established by friends and family in memory of Maurice Feingerts, a past leader of the JCC.  This year’s recipient was board member Scott Barron.

“Son of previous Executive Director Arlene Barron, Scott grew up hearing stories about the JCC at the dinner table, which allows him to bring a unique perspective to the board,” said Lee. 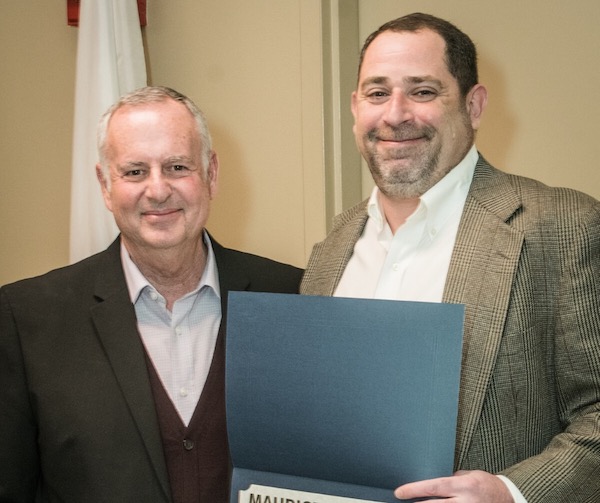 Scott has served on the New Orleans JCC Board of Directors for the past eight years. During his term, Scott has served on many committees including Nominating, Budget, Planning and Evaluation, Capital Campaign and most recently Chairman of the Membership Committee.

As this year’s recipient, Scott will attend the JCC Association JSummit (formerly known as the JCCA Biennial) in early May.  There, he will join young leaders from across the country in the Esther Leah Ritz national leadership program.

In addition to the awards, attendees celebrated major milestones and accomplishments in 2019. For a recap of the past year, click to play the video below.

Get your Legos ready, clear the table, and participate in a Lego building challenge led by Camp...
Apr
7

The JCC and The Parenting Center at Children's Hospital are pleased to offer a series of parenting...
Apr
9

Come hang out (virtually) with all of your Taglit friends. We will be catching up with each other...

Were Quarantined -- But What About Passover?

No doubt this year’s Passover seder will be different, but that does not mean it cannot be special and meaningful.  Rachel Ruth, the JCC’s director of senior services and basic go-to person for all things food-related, shares her thoughts on next week’s Passover celebration.

Missing your favorite spots at the JCC? We've got you covered with virtual JCC backgrounds to use on your Zoom calls. See below for a tutorial on how to update your background, then click your favorite image to download.

Utilizing the newly created JCC Camp Facebook Group, our Assistant Camp Director logged into Facebook Live and led camp families through favorite dances like "I Get Loose" and "All I Eat Is Pizza." WWL spotted Brigid in action and interviewed her for the Monday night news.