“This series has brought the best Jewish authors, films, and music to the JCC year after year thanks to the support of Cathy and Morris Bart,” said Executive Director Leslie Fischman. “We will adapt how audiences enjoy the series this year to ensure our community can still access this quality programming in a safe and comfortable environment.”

Each film will be screened three times in the Mintz Auditorium of the New Orleans JCC Uptown campus. Both evening and matinee showings will be offered. Due to limited space at each viewing, reservations will be required in advance. Individually packaged snacks will be provided to all who attend.

Author events will be held virtually. Featured books can be purchased locally through Octavia Books, which donates a portion of each sale to the JCC.

The first event in this year’s series will be Love in Suspenders. Tami, a widow in her 60's and Beno, a widower in his 70's, are both grieving the loss of their loved ones. A chance encounter brings the two together. Despite a "bumpy" first meeting, clashes in personalities and lifestyles, as well as interfering children and neighbors, they fall in love. A humorous, honest and heartfelt look at love the second time around.

Mossad! was a box-office smash in Israel, featuring the creative support of legendary filmmakers David Zucker and Avi Nesher, Mossad! is a riotous sendup of the Mossad, Israel's revered national intelligence agency. When an American billionaire is kidnapped in Israel, operative Guy Moran teams up with the CIA's best agent to try and save the day-with wildly entertaining results. Starring Tsahi Halevi from Fauda.

The third film of the series will be Douze Points. A proud, gay, Muslim singer is fulfilling his dream of representing France in Europe's biggest song contest, this year taking place in Tel Aviv. This action-comedy mixes bumbling ISIS operatives, tough Mossad agents and a unique relationship between two young Muslim men in the most rainbow-colored song contest imaginable. 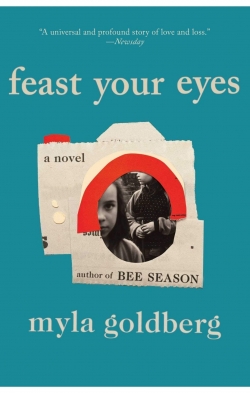 Feast Your Eyes: A Novel

Buy the BookJoin the talk

Myla Goldberg is the bestselling author of Feast Your Eyes, The False Friend, Wickett’s Remedy, and Bee Season, which was a New York Times Notable Book, a winner of the Borders New Voices Prize, a finalist for the Hemingway Foundation/PEN award, and was adapted to film and widely translated.

Feast Your Eyes, framed as the catalogue notes from a photography show at the Museum of Modern Art, tells the life story of Lillian Preston: “America’s Worst Mother, America’s Bravest Mother, America’s Worst Photographer, or America’s Greatest Photographer, depending on who was talking.” After discovering photography as a teenager through her high school’s photo club, Lillian rejects her parents’ expectations of college and marriage and moves to New York City in 1955. When a small gallery exhibits partially nude photographs of Lillian and her daughter Samantha, Lillian is arrested, thrust into the national spotlight, and targeted with an obscenity charge. Mother and daughter’s sudden notoriety changes the course of both of their lives, and especially Lillian’s career as she continues a life-long quest for artistic legitimacy and recognition. 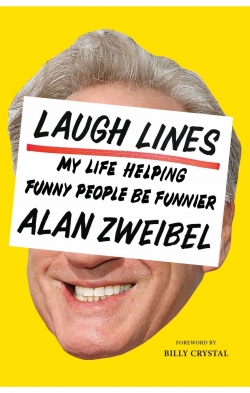 Buy the BookJoin the Talk

Alan Zweibel is an original Saturday Night Live writer who has won multiple Emmy and Writers Guild of America awards for his work in television. He also collaborated with Billy Crystal on the Tony Award–winning Broadway play 700 Sundays and won the Thurber Prize for American Humor for his novel The Other Shulman.

Throughout Laugh Lines, Zweibel weaves together his own stories and interviews with his friends and contemporaries, including Richard Lewis, Eric Idle, Bob Sagat, Mike Birbiglia, Sarah Silverman, Judd Apatow, Dave Barry, Carl Reiner, and more. The book also features a charming foreword from his friend of 45 years, Billy Crystal, with whom he co-wrote and co-produced the film Here Today starring Crystal and Tiffany Haddish. Laugh Lines is a warmhearted cultural memoir of American comedy.

In the summer of 1976, Aulcie Perry was playing basketball in Harlem when he was signed by a scout for Maccabi Tel Aviv. A year later, while taking the team to new heights, Perry converted to Judaism and became one of Israel's biggest stars. Behind the scenes, though, all was not well. This is the story of a remarkable athlete who captured the spirit of a nation. 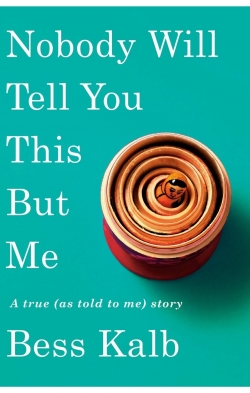 Nobody Will Tell You This But Me: A true (as told to me) story

Buy the BookJoin the talk

Bess Kalb is an Emmy-nominated comedy writer and the bestselling author of Nobody Will Tell You This But Me, a New York Times Editor’s Choice. She wrote for eight years on Jimmy Kimmel Live. She also writes for The New Yorker's Daily Shouts. She received a WGA Award in 2016. She has written for the Emmy Awards, the Academy Awards, and the 2020 DNC.

In Nobody Will Tell You This But Me: A true (as told to me) story, Bess Kalb, gives us proof of the special bond that can skip a generation and endure beyond death. Bess Kalb saved every voicemail her grandmother Bobby Bell ever left her. Bobby was a force–irrepressible, glamorous, unapologetically opinionated. Bobby doted on Bess; Bess adored Bobby. Then, at ninety, Bobby died. But in this debut memoir, Bobby is speaking to Bess once more, in a voice as passionate as it ever was in life.

Get outside and get grounded! Start your Sunday with fresh air, friends, and flow. Join JCC yoga...
May
17

Lifelong member, Peggy Myers, recently joined the JCC fitness staff as an instructor. We are excited for Peggy to bring her enthusiasm for the JCC to our members. Get to know a little more about Peggy and sign up to take a class!

The global Jewish community will come together in the coming days to commemorate lives lost during the Holocaust, remember fallen Israeli soldiers and victims of terrorism, and celebrate Israel’s independence.

What's Changing at the JCC in Phase 3?

Following the city’s transition to a modified Phase 3, the New Orleans JCC will ease restrictions for fitness center users. We see this forward movement as a small step in getting back to normal; however, it is still our top priority to remain safe.

If you’re a member of the JCC, odds are that you’ve encountered the energetic and encouraging presence that is Michele Huck. As an instructor at the JCC for six years, Michele has done a little bit of everything from cycling, senior chair exercise, Barre, HIIT, and what she’s known most for these days –– LOTS of Aqua Fit.